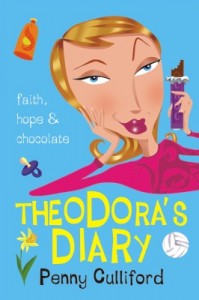 It is 11:30 p.m. and I am suffering from an incredibly intense chocolate craving that will not leave me in spite of prayer, distraction activities and half a loaf of bread and butter. Got out of bed and searched the flat. No luck. Not even a bourbon biscuit. Not even a cream egg left from Easter. All the shops are closed so no nipping out to replenish supplies. Nothing else for it. I’m reduced to the chocoholic’s equivalent of meths-cooking chocolate.

It’s been one of those days for Theodora. Her mother has become the Greek equivalent of Delia Smith, her boyfriend would rather watch 22 men kick a ball around a field than go shopping with her, and chintzy Charity Hubble wants to pray for her. And of course, the crowning insult is her utter lack of chocolate. Join in her daily life with all of its challenges and joys, tears and laughter.

The hilarious, sparkling and endearing diaries of a thirtysomething Christian, Theodora Llewellyn. 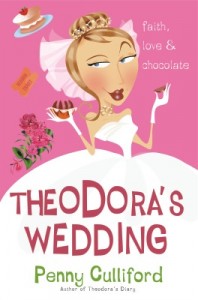 I’ve actually done it! I’ve kept up my diary for over a year.

I may not have grown very much spiritually, nor have I been hailed as the next British supermodel, but I have gained a fiancé, even if he is football mad. And to cap it all, I weigh half a stone less than I did this time last year.

Welcome back to Theodora’s world. Now a bit older but not much wiser, thirty-something Theodora Llewellyn begins her second year as a diarist. And as usual, the results are endearing, hilarious and delightfully human.

Joy, bliss, ecstasy! Have just tried my holiday clothes on and they are actually too big! What a fabulous excuse to go and buy some new ones. Unfortunately, bank account doesn’t agree. Saving to get married is such a nuisance.

In her search for life, love and a plentiful supply of chocolate, Theodora discovers that the course of true love never runs smoothly, especially when a voice from the past precipitates a crisis. But fear not – Theodora’s humour and wit are up to the challenge. In the end, just one question remains unanswered: Exactly how much vitamin C is there in a chocolate orange? 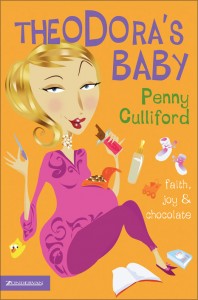 “I’m not sure I’m cut out for parenthood.

It’s not in my plan. All right, I haven’t actually got a plan, but if I had one, this wouldn’t be in it. I don’t even like babies—nasty, small, noisy, smelly things that take over your life. But this is a different baby. This is not just a baby; this is our baby …”

Newlywed Theodora discovers a slight oversight she and Kevin made on their honeymoon. Now she’s gained an important new subject for her famous diary—but at such a cost!

“Tom opened the oven door and got out the most enormous chocolate pudding and placed it on the table in front of me. ‘Especially for you, dear sister,’ said Ariadne. I swallowed hard a few times then took off for the bathroom. Ariadne looked at Tom and said, ‘I told you so.’”

What? Theodora sick (literally) of chocolate? How will she survive without her favorite food group? Answer: with typical irrepressible humour that finds much to laugh at about marital bliss, faith, friendships, and the foibles of pregnancy. But will she be reunited with her lost love? Never fear—Theodora and chocolate can’t be separated forever.

The Art of Standing Still

Nothing much ever happens in Monksford. Even so, reporter Jemma Durham dreams of the story that will take her from the small Monksford Gazette to a national newspaper. Then the town revives the tradition of the medieval mystery plays that were performed across England hundreds of years ago-and life in Monksford turns decidedly more interesting.

Jemma takes a role to cover the experience for the paper. But the real story unfolds behind the scenes-a forbidden kiss, bribery, and tragedy! Jemma holds the power to destroy lives and advance her career, but at what cost?

5.0 out of 5 stars
A great read. 13 April 2007
By Jean Paul
Format:Paperback
A really engrossing story with unexpected plot twists, credible characters set against the background of the Mystery plays. Profound and funny, I loved this book and it held my intrest on every page. Read it.
5.0 out of 5 stars
A really good read! Recommend it! 13 Jan 2011
By Nads
Format:Paperback
I really enjoyed this book. Penny is such gifted, talented and witty writer. She has an expert knowledge on the Mystery plays and I thought her characters were true to life. A really engaging and enjoyable read. I was so sorry to put it down!!
Customer Reviews on Amazon.com
Amazon.com: 4.0 out of 5 stars
Great Mystery! 12 Mar 2009
By L. E. Bowers – Published on Amazon.com
Format:Paperback|Amazon Verified Purchase
I picked this up as a light read, and while it definitely isn’t heavy, it wasn’t as fluffy as I expected. It was a wonderful page-turner with great characters that, while they take a bit to develop and relate to, you really root for in the end. I really hope to find another book to see what happens to these people.
There is a great sort of twist that makes this book stand out as different from other books of this genre. I really enjoyed this book a great deal and definitely would recommend it if you are looking for a book that isn’t too heavy, but isn’t just about being boy crazy.

Buy The Art of Standing Still from Amazon

The Art of Standing Still is also available as an audiobook